Dufner – From NCJT to Major Champion!

Jason Dufner, NCJT Alumni and Hall of Famer, put on an incredible ball striking display in route to capturing the PGA Championship and the Wannamaker Trophy. 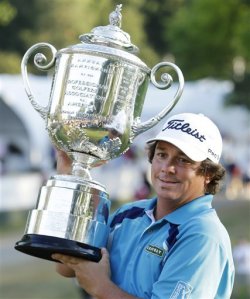 Even with a bogey-bogey finish he still set the all-time scoring record for a major at the famed Oak Hill CC in Rochester, NY. by four strokes.  The previous record over 5 majors was held by Jack Nicklaus, who won the PGA Championship at 274.  Dufner scored 270 with rounds of 68-63-71-68 to beat the strongest field in golf, 99 of the top 100 teed it up in the PGA.

A Big Congratulations to Jason Dufner from all his friends on the junior tour!