Dufner, NCJT Hall of Famer, set a new competitive course record on the East Course — erasing Ben Hogan, Curtis Strange and Webb Simpson from the record book — and became the 24th man to shoot a 63 in a major, and the 12th to do it in a PGA. And he knew as he studied that putt at No. 18 exactly what was on the line.

“I know the history of major championships so I knew that nobody had shot 62, and the course record I had heard on TV earlier in the week,” Dufner said. “So I knew where I stood and you couldn’t have a better chance at history on the last hole.” 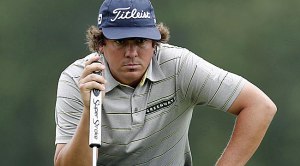 “It was a great day,” he said. “To join history, to shoot a 63 in a major is pretty unbelievable, so hopefully it will propel me to a great weekend.”

Bring it home Dufner!   The junior tour is behind you all the way in your quest to capture the Wannamaker Trophy!